The Artificial Intelligence (“AI”) vs Intelligence Augmentation (“IA”) debate has been around for over half a century. IA or Intelligence Augmentation classically refers to the effective use of information technology in augmenting human capabilities, and the idea has been around since the 1950s. AI is increasingly being used today to broadly describe machines that can mimic human functions such as learning and problem solving, but was originally founded on the premise that human intelligence can be precisely described, and machines made to simulate it. The term Artificial General Intelligence (AGI) is often used to represent only the latter, stricter definition. There is unprecedented hype today around AI, its incredible recent growth trajectory, myriad potential applications, and its potential emergent threats to society.

The broader definition of AI creates confusion, especially for those that may not be closely following the technology. Recent highly visible advancements driven by application of machine learning are sometimes misinterpreted and extrapolated to imply that we are at the threshold of imminent advance towards AGI, and all that it would entail for the societal order.

There is possibly a continuum of progress between IA and AGI technologies. I posit in this article that the rapid advances we are seeing represent an acceleration of IA technologies driven by machine learning. However, moving towards the original premise of AI — and AGI — would require significant additional technical breakthroughs beyond recent advances. IA technologies help advance human potential by increasing worker productivity, alleviating mundane tasks, and enhancing convenience in our lives. What we are seeing today is an acceleration in machines’ abilities to perform tasks that they have already been better than humans at for decades. And over the next decade, we will see further rapid advances along these fronts driven by further penetration of machine learning technology across many industries and spheres of life.

The State of Artificial Intelligence

Download our research briefing to dive into private market trends, startups working on ‘general AI’ or human-like intelligence, and the most prominent industries using AI algorithms.

Many AI and machine learning algorithms used today have been around for decades. Advanced robots, autonomous vehicles, and UAVs have been used by defense agencies for nearly half a century. The first virtual reality prototypes were developed in the 1960s. Yet, as of late 2016, not a day goes by when a main stream publication doesn’t pontificate on the upcoming societal impacts of AI. According to CB Insights data, funding for startups leveraging AI will reach $4.2B in 2016, up over 8x from just four years back.

There are many factors at work, but there is consensus that many recent developments, such as massive recent improvements in Google translate, Google DeepMind’s victory at the game of Go, the natural conversational interface of Amazon’s Alexa, and Tesla’s auto-pilot feature, have all been propelled by advances in machine learning, more specifically deep learning neural networks, a sub field of AI. The theory behind deep learning has existed for decades, but it started to see renewed focus and a significantly accelerated rate of progress starting around the year 2010. What we are seeing today are the beginnings of a snowball effect in the impact of deep learning across use cases and industries.

Exponentially greater availability of data, cloud economics at scale, sustained advances in hardware capabilities (including GPUs running machine learning workloads), omnipresent connectivity, and low power device capabilities, along with iterative improvements in algorithmic learning techniques have all played a part in making deep learning practicable and effective in many day-to-day situations. Deep learning, along with other related techniques in statistical analysis, predictive analytics, and natural language processing, are already beginning to get seamlessly embedded in our day-to-day life, and across the enterprise.

Machines have long been significantly better than the human brain at several types of tasks, especially those that relate to scale and speed of computation. Three academic economists (Ajay A. et al) in a recent paper and HBR article posit that the recent advances in machine learning can be classified as advances in machine “prediction”:

While there are purpose-built machines that can demonstrate selected human-like soft skills, machine capabilities in those areas have not made nearly as much progress as they have in the “prediction” function, driven by deep learning, over the past few years. Here are some areas that humans excel at, and new technology breakthroughs may be required for machines to emulate:

Summarizing the above – while machines have made rapid strides at learning or “prediction” skills, they are in their early days of attempting to emulate truly “human” skills. We propose that we classify prediction, first-order machine learning, and human-in-the-loop automation capabilities as “IA” technologies. These technologies typically use the unique power of machines (ability to process huge data sets) to effectively augment human capabilities, and the final output of the system typically depends on humans that bring complementary skills, those that train them, and those that design them.

Given its original roots, as well as the potential for confusion with AGI, the term AI should be reserved for machines that additionally demonstrate aforementioned human capabilities of judgement, common sense, innate creativity, ability to learn to learn, and empathy. This may still be short of the omnipotent AGI, but full automation of complex work flows would require machines that have most of these skills.

With this lens, here is how one could classify some current and upcoming technologies expected to impact our daily lives and work: 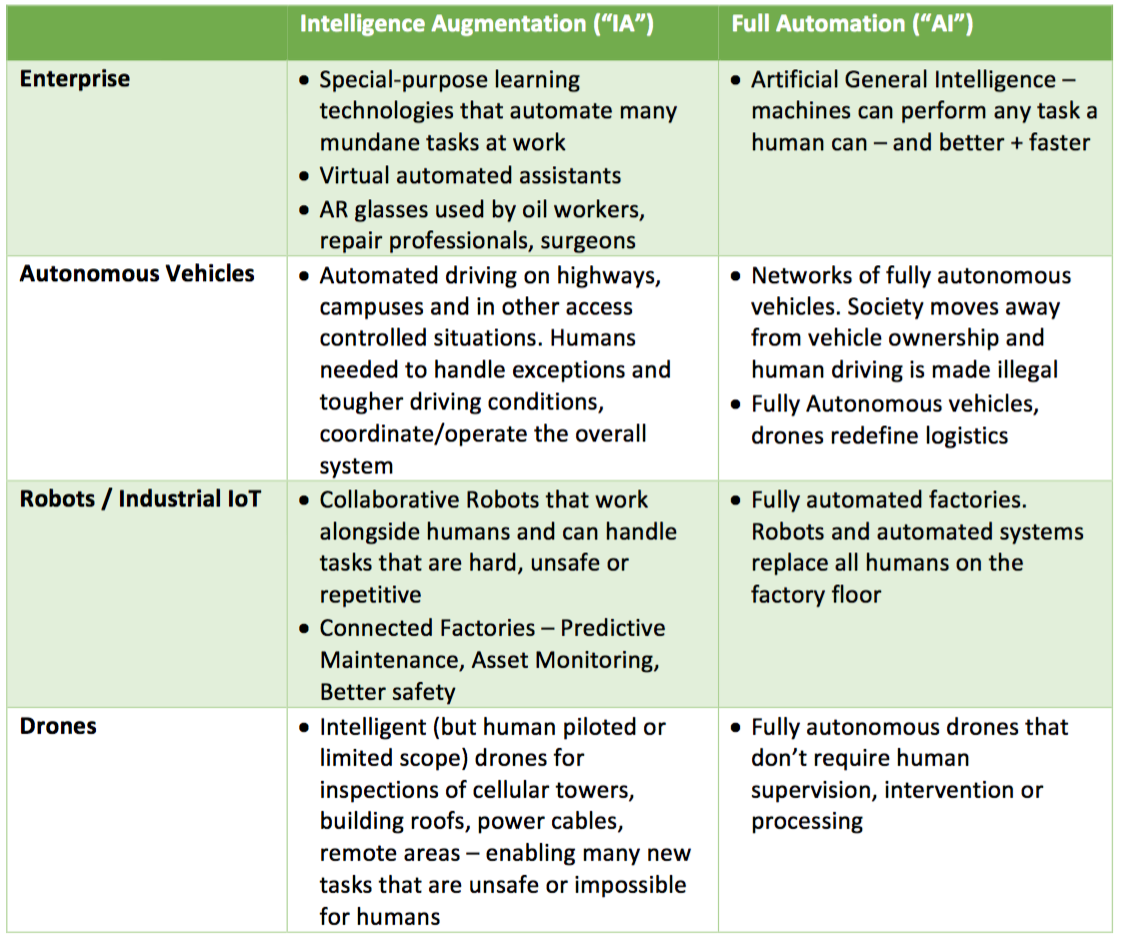 Impact of IA and AI

It is a well-known adage that we tend to overestimate the impact of technology in the short term, but underestimate it in the longer term. This is also known as “Amara’s Law,” and often represented by the illustration below. 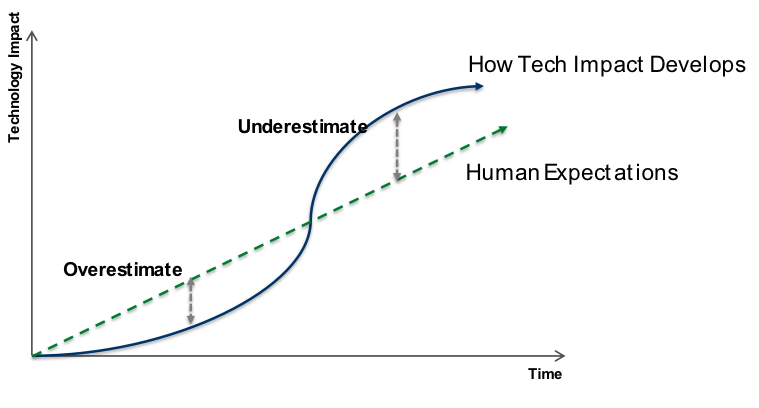 It is noteworthy that this curve does not have a scale on either axis. And at any point at the beginning of the curve, we don’t accurately know how far out that inflection point is. But it does illustrate an important tendency well — that the impact of new technology breakthroughs is initially slow to take off, then accelerates significantly as the technology develops and reaches mass market adoption, and eventually saturates. Human and market expectations tend to overlook this trend. This then feeds into the well-known market hype cycles where human expectations initially get well ahead of the immediate impact of the technology, thereby creating the milieu for the dip into the trough of disillusionment. As the tech impact then continues to expand and reaches broad scale, the technology reaches the plateau of productivity.

I believe that what we are seeing today in the form of significant developments and awareness around the term “AI” is really an acceleration of a prior “IA” curve, where deep learning using artificial neural networks (along with aforementioned drivers around hardware, data, cloud economics, connectivity, and other algorithmic advances) is driving us towards an inflection point on that curve. In many scenarios, deep learning provides an upgrade over prior “prediction” methods that used regression and other statistical tools, rules-based systems and/or hand-coded logic. Machine learning is providing significant acceleration here by improving model accuracy, increasing ability to process data, and being more adaptive to inputs.

In light of aforementioned limitations that machine intelligence still has, I think that the curve for full automation technologies should be seen as an entirely new one. And I believe we are still in very early days of the full automation curve.

There have been multiple prior hype cycles and inaccurate predictions around AI and singularity. Many AI pioneers during its early days in the 1950s believed that machines with full human-like capabilities would exist within ten or twenty years. The reason we didn’t get there was not that computing power did not advance fast enough, but that scientific breakthroughs on multiple new dimensions were required for that to happen. And the timing of such fundamental breakthroughs is hard to predict and coordinate. According to Stephen Hawking, as of 2015, “There’s no consensus among AI researchers about how long it will take to build human-level AI and beyond.”

We are likely close to a local maxima in the hype around “AI.” However, IA (as defined above) presents a very large investing opportunity with a 5- to 10-year horizon. Humans and machines at the current point in time complement each other, excelling at different types of skills. This will enable humans to focus on skills that they uniquely possess and enjoy exercising, while machines handle most of the mundane tasks that do not require human skills of judgement, creativity, and empathy. A lot has been written about the changes that IA technologies would entail to the nature of work and jobs, and change is not going to be easy for all. This Wired article summarized it well: “You’ll be paid in the future based on how well you work with robots.”

Where are the immediate innovation and investment opportunities?

I believe that the impact of IA (human-enhancing automation using deep learning and other machine learning techniques) would be bigger in the medium term than most think, while full automation is further away than some recent reporting might indicate.

The point of this post is not to speculate on whether AGI is 10 years away or 100, or whether or not it is a threat to society. The point I am making is that if you are investing in or starting a company or project today with up to a 5- to 10-year horizon to achieving mass scale, there is significant immediate value in IA or human augmentation technologies propelled by machine learning, and that these present a lower resistance path to commercial and societal success.

As always, for B2B models, we are looking for offerings that: address a clear existing pain point, can demonstrate strong ROI, fit neatly into existing work flows, are able to align interests with the buyer, user, and facilitator in the enterprise, and are a pain killer rather than vitamin. In this space, I would bet on human-in-the loop (IA) technologies, which help increase overall productivity, optimize costs, personalize solutions, or help business offer new products to their customers.

Machine learning technologies are being applied to many aspects across various vertical industries. This is a topic for an entire investment thesis (or at least a separate post of its own), but here is a short list of sectors where companies are leveraging advances in machine learning to augment human capabilities, enhance productivity or optimize use of resources:

The 100 year Study on Artificial Intelligence being conducted by a preeminent academic panel recently published a balanced report with a good overview of opportunities and progress in machine learning technologies across many of these sectors. CB Insights has a compendium of how deep learning is being applied by innovative startups across a broad set of industries.

Time for a change in terminology

As machine intelligence moves well beyond its erstwhile realm within the technology industry, and into various “traditional” industries, it is beginning to touch numerous people who are not versed with the technical terminology around AI techniques.

We would be well-served by being more nuanced in the use of the term “AI.” To avoid confusion, risk of adverse sentiment and regulation, and to better recognize the upcoming era of abundance, we should switch to using a term such as “IA” to describe recent advances achieved from using machine learning techniques. I believe that IA better describes the human-machine symbiosis that the impact of the current breed of technologies depend on. I am not suggesting something unprecedented. As machines become more capable, mental facilities once thought to require intelligence are typically removed from the definition of AI. E.g., Optical Character Recognition was once considered an AI technology, but having become a routine technology, is not generally considered so now.

Let’s use the term AI solely to describe full automation technologies, which, as we have argued, are not necessarily a direct extrapolation of the curve we are on today. And in the meanwhile, let’s capitalize on opportunities arising out of rapid recent strides in IA technologies.